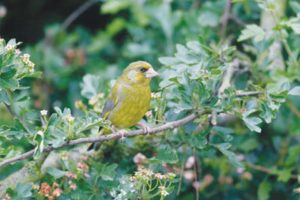 I was in Provo, Utah for a few days last week and managed to squeeze in a little bird watching. I saw a good variety of bird species during my brief trip, and I couldn’t help but reflect on how bird populations are affected by the development of towns and cities.

If I were to ask you to guess what the most abundant species was that I saw, would you have thought of American robin? Probably not.

Historically, the valleys in Utah were arid, and the primary plant community was sage brush. One of the largest deserts in North America is the Great Basin, which covers much of Utah. In a sagebrush habitat, there is not a lot of variety of bird species. The low number of bird species in this area is a reflection on the lack of water, the long cold winters, and an overall lack of trees. Bird species frequently seen in this habitat are common ravens, red-tailed hawks and an occasional magpie.

However, over time, the gradual urbanization of Utah County resulted in a completely new habitat where the desert has been transformed into a very different habitat. It seems as though every home has a beautiful lawn and an abundance of trees.

The drive north on I-15 from Cedar City in southern Utah to the Provo area in central Utah is over two hundred miles. With the exception of agricultural fields, there is nothing but sagebrush for hundreds of square miles. The landscape really hasn’t changed too much in this part of the country for thousands of years.

The transformation of habitat in Utah County from sagebrush to manicured yards has resulted in a far greater diversity of bird species, or more species richness. It is an interesting case study to observe how, over time, birds have adapted and expanded their ranges into areas where, in the past, they did not exist. It is a testament to the fact that birds are resilient and adaptable.

Examples of this adaptability were the number of bird species I observed that are typically thought of as being eastern birds, such as American Robin, American Crow, American Goldfinch, black-capped chickadee and downy woodpecker. There are, of course, several introduced species as well, such as California quail, ring-necked pheasant, Eurasian collared-dove, European starling and house sparrow – all of which thrive in this urban environment.

Historically, none of these birds would have occurred in a sagebrush habitat.

My experience in Utah has caused me to reflect – has the Prescott area experienced a similar change in bird species? Are we seeing similar trends in bird populations and species richness? Have some species fared better than others with the urbanization of this mountainous area we call home? Do the same species occur here that occurred before our modern day society? Are there new species in the area that were not present one hundred years ago due to the changes in habitat?

On a separate note, but probably related to today’s column, we are getting daily reports here at the Bird Barn of unprecedented lesser goldfinch numbers. For whatever reason, last year was a bad year for goldfinch numbers. This year it is just the opposite. We’re hearing the, “I’m getting eaten out of house and home,” line every day! If you have a nyjer/thistle feeder still up from last year, it would be a good idea to take it down, get rid of the old seed, clean the feeder and refill it with fresh seed.