What are those big black birds at local lakes? 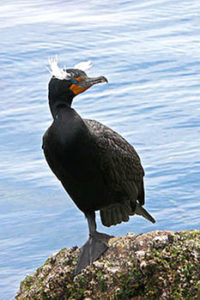 As the owner of a backyard wild bird store, I am asked a lot of questions about birds. A frequent question this time of year is the identity of the large black birds that are found at Willow, Watson and Lynx Lakes.

I am not talking about ravens, which is another frequent question: “Are the big black birds ravens or crows?” The big black birds that people are seeing at the lakes are a type of water bird. Are they a loon? How about a grebe? Or, are they some kind of duck?

What you are seeing are cormorants, more specifically, double-crested cormorants. On rare occasions we see another (smaller) cormorant species called a neotropic cormorant.

Double-crested cormorants are interesting in several respects. First, they are a very large bird. In the Sibley guide they are listed as being 33 inches long, with a 52-inch wingspan. They are migratory, arriving in the Prescott area in late winter.

They dive under water and swim in pursuit of prey. They are not waterproof like ducks, therefore they have to sun themselves to dry off after they have spent a considerable amount of time in the water.

Breeding plumage includes wispy feathers over the eye (like a long, white eyebrow), as well as a bright orange throat. Personally, I think cormorants appear very gangly. They really can’t walk on land – they spend their time either in the water, on a perch drying out or up in trees. I think they look prehistoric.

They are an early nester – they are already on their nests out at Willow Lake. Even though they are water birds, they nest high up in the tops of mature cottonwood trees. Their nests are made out of large sticks, reminiscent of a bird of prey nest. At the nesting site they are very vocal, making un-musical guttural sounds.

Probably the easiest place to view double-crested cormorants (you won’t even need binoculars) is at the cottonwood peninsula on the western edge of Willow Lake. Turn off of Willow Creek Road at the entrance for the dog park. Continue past the dog park until you come to the kiosk for the trailhead for Willow Lake trail. Go north (left) on the trail for about a quarter of a mile until you come to a spur trail that goes off to the right into the Cottonwood grove. You can’t miss all of the cormorants, great blue herons and maybe even a great-horned owl pair that nests in these trees.

I was in Phoenix this past Saturday, so I made a visit to the Gilbert Water Ranch. I saw about 55 species and added three more species to my 2012 State List. Something that impressed me as interesting was seeing male brown-headed cowbirds actively displaying in an effort to attract a mate.

Another interesting observation was watching Lincoln’s sparrows actively bark, and foliage gleaning in large mesquite trees. I have never observed this behavior before in this species. Normally Lincoln’s Sparrows are difficult to see, as they are typically skulkers, hiding down in the leaf litter in brushy habitats.

Jay’s Bird Barn continues to offer free weekly bird walks in the Prescott area. This week’s walk will take place on the north side of Willow Lake. The dates, times, locations and field trip leader information are all available online at www.jaysbirdbarn.com. Call the store at 443-5900 to reserve your place.