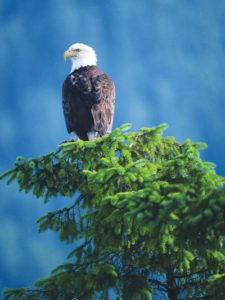 Last Wednesday I decided to head up to Goldwater Lake to search for some new birds to add to my 2014 state list. A recent field trip (that I was not on) turned up a few birds that I had not seen yet this year – Cassin’s finches and a Williamson’s sapsucker.

What I went there hoping to see and what I actually saw was completely different. I did not see any Cassin’s finches or Williamson’s sapsuckers, but I did see nine, yes, nine bald eagles!

It was about 8 a.m. when I arrived, and right away I saw a lone juvenile fly across the lake from the north shore to the west side of the lake just to the south of the dam. I didn’t have my spotting scope with me (I wish I had), but I made do with my binoculars.

As I was glassing the forested area south of the dam with my binoculars, I could see a group of three hikers moving along the trail on the southern edge of the lake. These individuals unintentionally flushed several eagles that were perched in some of the large ponderosa pines.

It seemed as if the air was suddenly filled with bald eagles. I started counting – one, then two, three, four, five… it was hard to keep track of each of the eagles individually, and I didn’t want to double count any of them.

When the eagles settled back into the trees, I was able to count nine different eagles – three adults and six juveniles. At one point while I was watching them, there were five eagles in the same pine tree!

It was thrilling to see so many eagles – by Arizona standards – at the same time. For those of you from Alaska, this experience might sound ho-hum and insignificant, but for me it was very exciting.

The water level at the lake is very low right now, but there was still a good variety of waterfowl present. I saw hooded and common mergansers, common goldeneyes, ruddy ducks, pied-billed grebe and, of course, mallards and coots. I also saw my first belted kingfisher of the year. It was rattling on the far side of the lake but I was able to locate it, which was a new bird for my 2014 state list.

Last weekend’s Great Backyard Bird Count was very enjoyable. The group I was birding with saw a white-tailed kite from the backyard of a home that backs up to Pioneer Park. Not too many people can boast that they have a kite on their yard list! The kite was certainly the highlight of my birding day, even though I enjoyed birding at each of the three homes we visited.

Last year, 198 different bird species were observed during the four-day event! The festival includes workshops, seminars, field trips and a keynote speaker. This year’s keynote speaker is Greg Miller, one of the original characters doing a ‘big year’ that the movie ‘The Big Year,’ starring Steve Martin, Jack Black and Owen Wilson is based on.

The keynote speaker event is on Friday, April 25, from 6:30 to 9 p.m. Tickets for this event can be purchased at both Jay’s Bird Barn locations, in Prescott and Sedona.