Bad weather a downer for bird-watchers 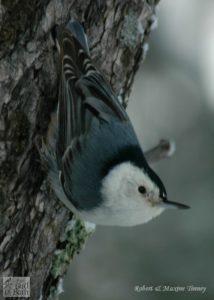 The Prescott Audubon Society’s annual Christmas Bird Count was Dec. 22. I was joined by my son, Jeremy, one of our employees, and a customer as we worked to discover the hidden bird treasures of the Granite Basin Recreation Area.

Now before I start telling you about our day, I need to remind you what the weather was like. One word should sum it up adequately: brutal. To be more specific, it was cold, extremely windy, and, by the end of the day, the rain was falling steadily.

I probably don’t need to tell you that weather affects bird activity, and the weather that day was no exception. Because I had scouted out my assigned area the two previous Wednesdays, I had a good idea what we might reasonably expect to find, and I had a goal to see at least 50 species on the day of the count.

However, we ended up missing several species that should have been guaranteed in the pinion/juniper habitat. The chaparral area was incredibly windy, much more so than down in the basin. The southern exposure – the area between Iron Springs Road and the saddle – was just being buffeted by the winds.

For the whole day, we found only eight species in this area, which is pretty pitiful! We missed such common species such as Gambel’s quail, white-crowned sparrow, crissal thrasher, canyon towhee and phainopepla. The birds were hunkered down and were not vocalizing, making it difficult to find them.

The area referred to as “Granite Basin” was sheltered from the wind by the mountainous terrain, so we ended up spending most of our day down in the basin as it was much more productive in the way of bird activity. This is where we found our most unusual species of the day – a gila woodpecker, a species normally found in a Sonoran Desert habitat!

There were several highlights scattered throughout the day as we worked our area trying to find species we were missing on our list. One highlight was finding a flock of red crossbills that was taking advantage of a water trough for horses. They were dropping down from the surrounding ponderosa pine trees to drink at the trough. It was nice to get such good views of the variation in plumage between males, females and juveniles.

Another highlight was getting really good looks at several red-breasted nuthatches in addition to the abundant white-breasted and pygmy nuthatches. There was also an abundance of Steller’s jays this year – more than I have even seen in this area in previous years. We also saw seven different woodpecker species: acorn, gila, hairy, ladder-backed, northern flicker, red-naped sapsucker and Williamson’s sapsucker.

We did strike out on some species that I was hoping to see in the ponderosa habitat as well. We missed Townsend’s solitaire, brown creeper and olive warbler, which I had seen just the week before. Amazingly, in spite of the challenging weather, we did manage to rustle up 44 species for the day, which I felt was pretty good.

As 2010 draws to a close, I would like to wish you a prosperous and a happy New Year that includes lots of fulfilling experiences in nature this coming year. Thank you for your friendship, support and encouragement. Our small, specialty store could not make it during these difficult economic times without your support. All of us at Jay’s Bird Barn really appreciate each and every one of our customers at both of our store locations.