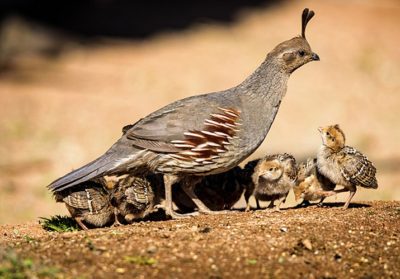 On Sunday, May 7, we found a tiny dead baby quail in our front yard. This is the earliest record for baby quail in my yard, and, interestingly, I haven’t seen a quail family in my yard before or after finding the dead bird. I picked up the baby bird and examined it for a cause of death. By the looks of it, it had probably hatched just hours earlier.

As you know, we have had some really unseasonably cool, windy days, and the day we found the baby quail was no exception. I can only assume that it must have gotten separated from its family and that it died from exposure.

While baby quail are mobile within hours of hatching and are capable of both walking and running, they cannot fly for a few weeks. Being confined to the ground limits their ability to get away from potential predators such as house cats, roadrunners, scrub-jays, ravens, snakes, raccoons, skunks and a host of other critters. As you might image, the mortality rate for baby quail is very high—about 85% in their first year.

When baby birds leave the nest, the young are referred to as fledglings. This period of time in the life of a baby bird is a time of high risk, and their lack of experience lends to higher predation rates on several accounts. Their unfamiliarity with cars, windows, predators, and even water, can lead to an untimely, early death. Initially, their ability to fly and maneuver is limited, making it difficult to evade predators. Additionally, their ability to fend for themselves in terms of finding sufficient food can be challenging for birds fresh out of the nest.

Each year, I mention in my column the recommendation to leave baby birds alone if you happen to find one. Our good intentions are not necessarily good for the birds. Their ability to survive in the wild is dependent upon them having life experiences from which they can learn. Taking them out of the wild and removing them from the tutelage of their parents is very detrimental.

Adult birds are far more likely to be successful in raising their young to maturity than is a human being. My recommendation, with very few exceptions, is to let nature run its course.

Even if you see a baby bird on the ground, the recommendation is to leave it where you found it. Baby birds are not bashful about vocalizing, and even if they move a distance from the nest, their parents will hear and find them. The parents will keep track of where they are and will continue to feed them for a period of time after they have left the nest.

A week from today is the last Prescott Audubon Society meeting before the summer break. The meeting features a program titled, ‘Prescott Monarch Butterflies: The Latest Story,’ presented by Cathy Palm-Gessner and Bob Gessner. The meeting is set for 7 p.m. at Trinity Presbyterian Church at 630 Park Ave. in Prescott. The meeting is free and open to the public. I hope you can come.

Also, a week from today is the one year anniversary of the Flagstaff Jay’s Bird Barn store opening. We have a simple one-year anniversary event planned on Thursday, May 25, from 10 a.m. to 2 p.m. If you haven’t had a chance to visit the store, we invite you to the open house. The store is located in the Sprouts shopping center just off of Milton Avenue. I hope to see you next week as we celebrate our one year anniversary in Flagstaff.