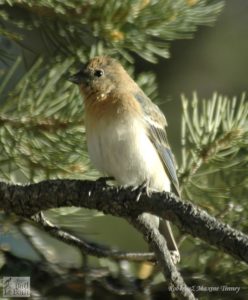 Over the last week, I have received reports from three different homeowners of lazuli buntings in their yards! The sightings came from South View (Williamson Valley), The Ranch (by the mall) and Victorian Estates (off Highway 69). Lazuli buntings are an example of a species which passes through Prescott in the spring on its way north and then again in fall as it heads south. I encourage you to be on the lookout for this absolutely beautiful species.

Every day I receive emails from customers, with digital pictures of birds attached. Some of the bird sightings are so-so, others are kind of interesting, and then there are the rare occasions when I receive pictures of an extremely uncommon bird.

This past week I received one of those really rare bird sightings via email from a customer in Chino Valley. He sent me four pictures-all of the same bird-asking me to confirm that he had identified the bird in the pictures correctly. Yes, it was identified correctly. It was a Mississippi kite, an unusual visitor to this part of Arizona!

Have you ever heard of a kite? Kites are relatively small-sized birds of prey that are known for their buoyant flight pattern. One of the unique behavioral characteristics of Mississippi kites is how they catch flying insects in midair with their feet! It has been my experience that their food of choice in the Chino Valley area are cicadas.

In The Sibley Field Guide to Birds of Western North America, the range map for Mississippi kites (page 99) shows that they do occur in Arizona, but typically not this far north or west. Carl Tomoff’s Birds of Prescott, Arizona, checklist indicates that this species is considered an accidental vagrant, meaning there have been five or fewer records of this species in Prescott since 1974!

Needless to say, I followed up on the customer’s discovery and made a trip out to Chino Valley to see if I could find this rare bird. I had specific directions where the bird had been seen, but I searched in vain for more than an hour. I really wanted to be successful, and I was starting to get discouraged when I suddenly saw a kite sitting right at the top of a dead tree, providing me with a phenomenal look at it. I was so excited to see the kite, as this was a new bird for my 2012 state list.

However, there is more to the story. A gentleman in the neighborhood saw me birding, and preceded to share with me that there was not one, but two kites, and they have an active nest in a cottonwood tree! Because of this kind individual, I was able to find the nest-which was so exciting!