Are the hummers back? 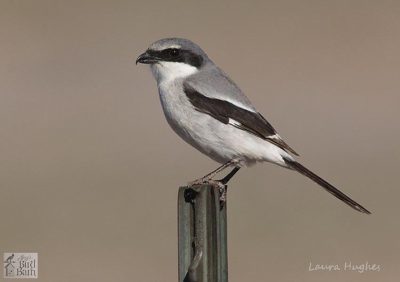 A loggerhead shrike was observed in Watson Woods earlier this week. (Courtesy)

Earlier this week I had an interesting email exchange with a customer that went like this:

Customer: “Are the hummers back?  I just saw one in my backyard! I think I had better get the feeder out and then take it in at night to avoid freezing. What could they be eating this time of year?”

Me: “Thank you for your email. I saw one yesterday in Watson Woods and I saw one today at Willow Lake! I would say it is a good idea to put out one feeder right now.”

Customer: “Sugar water made and cooling down. The feeder will be operational in about an hour!”

Me: “Perfect!  Your hummer will be happy.”

Customer: “You won’t believe this. I am hanging up the feeder and the hummer was right next to me, waiting for the food. I heard the buzz of the wings, and there he/she was within 2 feet of my hands. Only one so far, so he/she has the whole feeder to itself! I thought no one would show up for a day or so.”

Me: “Wow, that is way cool.  Chances are it is one of the same hummingbirds that was frequenting your feeder last year and it knew there was a feeder hung in that exact spot, so it came back to that exact spot looking for food.  They are so smart!”

Customer: “Man, they must have one he.. of a built-in GPS system!”

It may seem odd that hummingbirds would start to come back this early, but it is not unusual for male Anna’s hummingbirds to arrive in January.  It will probably be several more months before the females return, but the advantages to males coming back early is they get to stake their claim!

Arriving first at a food source gives the early hummingbird a chance to be the dominant hummingbird to guard the feeder, and chase late-comers away.

During March and April, rufous hummingbirds will make very brief appearances as they pass through on their way north.  This time of year, they are in a hurry to get back to their summer breeding range, which is as far north as Canada and southern Alaska!

It has been my experience that hummingbirds moving north during spring migration are in a hurry to get back, so they don’t stick around very long.  Just the opposite seems true in fall.  As they move south, they tend to linger, spending more time tanking up at feeders before moving on.

It won’t be until April before other hummingbird species start to show up, such as black-chinned, broad-tailed, some calliope and maybe even a few Costa’s.

On Monday, temperatures in the Prescott area got up into the 60’s, warm enough to feel almost spring-like.  On a bird walk with a Prescott College class in Watson Woods that day, we actually witnessed a loggerhead shrike swoop down and catch a good-sized lizard that was sunning itself on a tree branch!

We were also treated to the dazzling display of a male Anna’s hummingbird that seemed to just pose for us in flight, showing off its flashy colors, and spending time perched in a bare tree long enough so we could get a scope set on it.

Our time in Watson Woods (mid-day) was somewhat quiet bird-wise.  However, a wiley coyote stole the show, and was probably the highlight for most of the students as it went streaking past us.  It is quite a thrill to be out and nature and witness the cycle of life unfolding right before your eyes.