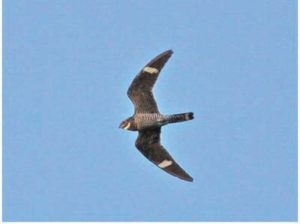 Gleaning is a word used to describe different foraging-or feeding-behaviors employed by wild birds. There are many different types of gleaning activity, such as ground gleaning, bark gleaning, foliage gleaning and aerial gleaning.

A ground gleaning bird, for example, could be described as a bird that forages down on the ground for seeds, insects and plant materials. Examples of ground gleaners in the Central Highlands area include Gambel’s quail, mourning dove and spotted towhees.

Bark gleaning behavior is restricted to only a handful of species in our area, including nuthatches, woodpeckers and brown creepers. You have probably had occasion to observe this behavior-birds shimmying up and down the trunk of a tree using their beak to exfoliate bark to uncover wood-boring insects.

Classifying what foraging or gleaning technique a bird uses helps categorize birds into families and aids in identification. For example, if you saw a bird exhibiting foliage gleaning behavior, you might assume that the bird you were observing was an insect eater. Knowing that it was an insect eater would narrow down the identification possibilities, as this behavior is specific to certain families such as warblers, vireos, kinglets and other small insect eating birds like bushtits.

This past week, as I was riding my bike on the Peavine Trail just after sunset, I witnessed several birds that were aerial foraging. This behavior is best described as birds capturing insects in sustained, continuous flight. This behavior is specific to only a few families of birds found in North America, such as swallows, swifts and goatsuckers.

Goatsuckers? No, I really didn’t make up this name. This is a family of nocturnal, insect eating birds that are divided into two main categories-nighthawks and nightjars. There are two different nighthawk species in Arizona, common and lesser. Nighthawks are really not a type of hawk at all, but this name has stuck over the years. The nightjar family is made up of several species including whip-poor-wills,

From the Peavine Trail, I saw several nighthawks flying-their long narrow wings and erratic flight pattern is so distinctive. To me, seeing a nighthawk on a warm summer’s evening is a symbol of summer in North America. Their vocalization, their flight, and the dives and swoops they make bring back memories of seeing this species when I was younger.

While biking, I saw other aerial gleaners as well, but they were not birds, they were mammals! Bats employ the same foraging technique as birds-aerial gleaning. It is pretty amazing that two completely different kinds of animals-one being a mammal and the other being a bird-have so many similarities, in spite of huge differences such as live birth compared to laying eggs; feeding their young milk instead of insects; and yet they both rely almost exclusively on insects caught in flight in order to survive.

The value of these insect eating aerial gleaners, whether it be birds or bats, is impossible to calculate. Each day,

and every night, individual aerial gleaners are taking out of the air hundreds, if not thousands, of insects. I can’t imagine a life without birds and bats and the benefits they provide, let alone the enjoyment we get from watching them.

Because aerial gleaners rely strictly on a diet of flying insects, both birds and bats are typically here only in the spring and summer months. As fall approaches, freezing temperatures reduces the insect population and aerial gleaners head south for warmer climes.