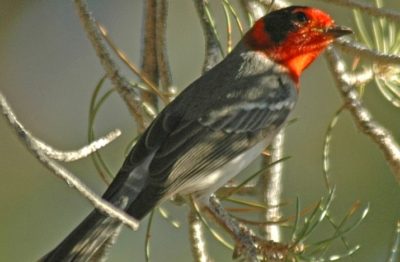 Ever since the Verde Valley Birding Festival almost a month ago, I have been itching to get back out birding. The month of May is one of the best months of the year to go bird watching, as migration is in full swing. This is the time of year when you can see the largest variety and the largest quantity of birds as they move through the Central Arizona Highlands.

I continue to keep a record in eBird — an online database of bird observations that provides real-time data about bird distribution — of all of the bird species I observe. Year-to-date, I have seen more than 500 species, mostly due to my Costa Rica trip in February. Aside from Costa Rica, however, I have seen more than 200 different bird species in the state of Arizona so far this year.

This past Saturday, I drove to Mingus Mountain and had a very birdy morning. There was so much bird activity, I found it challenging to decide where to focus my attention. I would see movement in a tree in one place, and at the same time I could see birds in other trees, all the while hearing yet other birds in a third location. It was really hard to stay focused on one bird at a time. It was as if the whole forest was alive with birds.

I thoroughly enjoyed it. Without exaggeration, I probably saw at least 100 western tanagers. This is a bird I never tire of seeing, as it is so beautiful. I also saw a handful of hepatic tanagers and many black-headed grosbeaks. I saw brown creepers, western bluebirds, band-tailed pigeons, broad-tailed hummingbirds and three species of nuthatches: white-breasted, red-breasted and pygmy.

One sighting that really surprised me was seeing several Bullock’s Orioles. Typically when I see this species, it is at a much lower elevation and usually in a riparian habitat — especially where there are cottonwood trees.

I checked the elevation app on my cellphone, and I was above 7,500 feet — in a ponderosa and white-fir habitat. Yet, there were orioles foliage gleaning in fir trees.

Another thing that struck me as odd was the fact that I never saw or heard a single jay species. I would have expected to have seen Steller’s jays and possibly Woodhouses’ scrub-jays, but I didn’t see or hear either. I can only assume they are in the area, but it is strange that I did not encounter any.

High-elevation mountains in Arizona are home to some unusual warbler species: red-faced warbler and painted redstart. I saw both of these species along with six other warbler varieties — Wilson’s, MacGillivray’s, orange-crowned, yellow-rumped, Townsend’s and Virginia’s.

Other species observed include American robin, hermit thrush, house wrens and numberless pine siskins. Of course, I also heard a lot of different species that I never saw, but could identify by their vocalization, such as wild turkeys, which make an unmistakable sound, and northern flickers, singing almost constantly.

Migration activity is already starting to slow down, but a lot of the birds that arrived will stay here all summer, including black-headed grosbeaks, blue grosbeaks, summer tanagers and more.

Tonight, Thursday May 24, is the last regular Prescott Audubon Society Meeting until next fall. The meeting starts at 7 p.m. at Trinity Presbyterian Church at 630 Park Avenue and is free and open to the public. The speaker is Noel Fletcher, Wildlife Biologist for the Prescott National Forest. It should be an excellent meeting.

Eric Moore is the owner of Jay’s Bird Barn, with three locations in northern Arizona – Prescott, Sedona and Flagstaff. He has been an avid birder for more than 50 years. Email questions about wild birds to eric@jaysbirdbarn.com.