A tale of observing nature in action 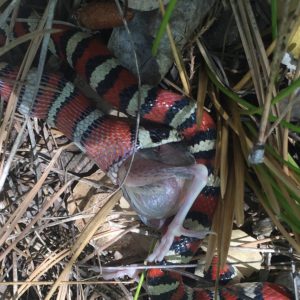 Three very different habitats overlap in the park—ponderosa pine, pinyon/oak/juniper, and riparian. The diversity of habitats results in a rich variety of bird species. We enjoyed watching an active Cooper’s hawk nest with young, a hummingbird nest that was incredibly camouflaged and an active Bewick’s wren nest.

We probably spent the first 45 minutes of the bird walk within one hundred yards of our vehicles—it was so birdy, we didn’t make much progress! We saw phainopeplas, acorn woodpeckers, yellow warblers, blue grosbeaks, cordilleran flycatcher, white-breasted nuthatch and we heard other bird species such as pygmy nuthatches, house wrens and western wood pewees.

Eventually we got on the Butte Creek Trail and headed out, birding along the way. Gradually, as we hiked the trail, the heat of the day caught up to us. We started back towards the park and took a brief rest at the trailhead, then decided to wrap up the field trip after we walked the loop trail in the park.

While walking, we started hearing spotted towhees—a species we had heard numerous times that morning, but had not seen. We specifically made a point to find the towhees. After a few moments, we found a pair of them about forty feet away. Their behavior and their vocalization indicated they were agitated and that something was ‘out of place.’ I mentioned to the group that I thought perhaps there was a snake that was upsetting them, and that I would go to take a closer look.

As I approached the area where the towhees were, they held their ground. The fact that I was only a few feet from them was a strong indication there was indeed something wrong. I also discovered other bird species in the vicinity also reacting to the towhees’ distress calls. A hummingbird, some lesser goldfinches and a Lucy’s Warbler were all within a few feet of me. There definitely had to be some kind of predator, but what, and where?

Finally I spotted the source of their consternation—a beautiful Sonoran Mountain Kingsnake. Upon closer examination, the cause for alarm was more than just the fact that there was a snake; the snake was in the towhee’s nest!

Getting closer, I could see a bulge in the snake. It looked like it had already swallowed an egg. Upon further investigation, I could see that the snake was in the process of swallowing a baby bird. At this point, the group of bird watchers left the trail and came over and joined me. Some sat, while others knelt on the ground, surrounding the nest, watching this life and death drama play out right in front of us.

The “Field Guide to Amphibians and Reptiles in Arizona” by Arizona Game and Fish Department mentions that the Sonoran Mountain Kingsnake is “proficient at raiding bird nests” and is “a strong constrictor. It consumes lizards, rodents, birds…”

While I could have intervened, it was already too late for the one egg and the partially swallowed bird. I would guess the baby bird was at least a week old. The body of the bird seemed so large compared to the diameter of the snake. I did not think there was any possibility of the snake swallowing the bird. We watched for probably 20 minutes, and to our utter amazement the snake successfully swallowed the bird. What an ending to our bird walk!