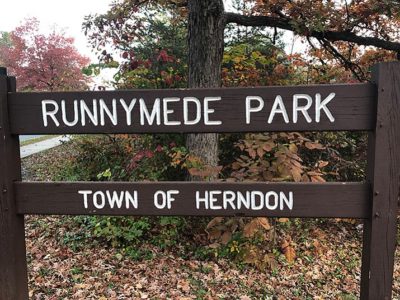 Greetings from the Town of Herndon, Virginia, located in Fairfax County. For the past week, Gayla and I have been visiting our son, Jeremy, and his little family as we welcomed granddaughter number three — Virginia. Being in a new place has provided me with an opportunity to do some bird watching!

On my first full day at Jeremy’s home, I was out on the back deck watching a tiny downy woodpecker excavating a roosting cavity. It would disappear down the hole, work for a while, then reappear at the entrance of the hole with beak-full after beak-full of shavings that it would spit out.

At the very moment I was watching the downy woodpecker, I received the following text from a customer in Flagstaff, “We are trying to sell our house, and after 30 years wouldn’t you know it, a downy [woodpecker] has decided this is where he wants to live. He pecked a hole and pulled out insulation all over the side-yard. What should we do?” The timing of the text was just too ironic — I was literally looking at a downy woodpecker in Virginia at the precise moment I received the text about the downy in Flagstaff!

Situated just walking distance from their home is a place called Runnymede Park, a natural park with walking trails intertwined through a deciduous forest with a creek running right through the middle of it. Needless to say, I have made my way over to the park every day — either to bird watch, to walk or both. While I have not seen anything new to add to my life list, I have thoroughly enjoyed birding here. The sheer number of birds is almost overwhelming.

On several occasions, I have stopped on the trail, and, without moving my feet, have seen upwards of 20 different species — robins, waxwings, sparrows, chickadees, kinglets, titmice, nuthatches and six different woodpecker species. My favorite woodpecker species here is the pileated woodpecker, which I have seen every day. It is the largest species of woodpecker in North America — about the size of a crow! Just imagine if this was pecking a hole in the side of your home!

As I have been bird watching I couldn’t help but think that for each of the birds I was seeing in the east, there was a western counterpart. Here are some examples:

While many of the eastern varieties have a western counterpart, I have also seen a lot of the same bird species here that we see in Prescott. For example, this week I have seen great-blue heron, turkey vulture, Cooper’s hawk, American robin, cedar waxwing, white-breasted nuthatch, ruby-crowned kinglet, northern cardinal, song sparrow, chipping sparrow, dark-eyed junco and house finch.

While there may be a significant distance between Arizona and Virginia, as well as a big difference in habitat, the similarities in birds is remarkable. It is easy to transition from birding in Arizona to birding in the east because of my familiarity with species that are similar in appearance, even though they are different species.