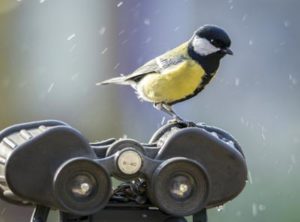 I arrived in my assigned Christmas Bird Count area Dec. 18 just after 7:15 in the morning. It was cold and snowing lightly, but I was well prepared with layers of clothes. My starting point was the intersection of Iron Springs and Granite Basin Road, and I gradually worked my way through my assigned area all the way down to the lake.

I divided my area into three sections: chaparral, ponderosa pine forest and water/riparian habitat. As I worked my assigned area, I recorded things like mileage in the car, mileage on foot, temperature, precipitation, and, of course, the different varieties of birds I was seeing, and how many.

For the day I drove 15.9 miles, and I estimated I walked about six miles, but that is hard to judge as I stopped frequently to bird watch. The lowest temperature I recorded was 29 degrees, and the high was 37. Light snow fell for the first three to four hours – with little accumulation – and there was absolutely no wind at all, which made the temperature much more bearable.

The chaparral habitat produced a variety of bird species including both the canyon and spotted towhee, western scrub-jay, western bluebird, a lone phainopepla, crissal thrasher, numerous ravens, and a variety of little songbirds such as nuthatches, finches, kinglets, juncos and sparrows. There were no amazing finds or surprises in the chaparral area.

The ponderosa habitat was more productive later in the day after the snow stopped. There were the usual suspects – white-breasted, red-breasted and pygmy nuthatches, western and Steller’s jays, Cassin’s and house finches, bushtits, yellow-rumped warblers and titmice. I did see the red crossbills that I was hoping to see, but my best find of the day in this area was a pair of olive warblers.

The last section, the water and riparian area, comprised the lake, the area below the dam and the area west of the lake. At the lake I counted 180 ring-necked duck, 99 American wigeons, 4 mallards, 15 American coots and a partridge in a pear tree. Just kidding about the partridge, but I did see one mourning dove at the lake – it was the only dove I saw all day!

Have you ever tried counting a flock of bushtits? This is not an easy task. Bushtits are small, active foliage gleaners. It is not uncommon for them to swarm a tree, fliting through the branches as they search for insects. The best way to count bushtits is as they leave one tree on their way to the next tree.

Instead of flying out of the tree as a flock, they haltingly fly out, one or two or three at a time. In this instance, they were in a small tree bordering a road. As they left the tree and flew across the road, I could see them clearly and I was able to count them one-by-one. I was surprised by how many bushtits made up this flock – I counted 53!

As the day drew to a close it was virtually cloudless – what a dramatic change from the snowy morning! As the sun set on Granite Mountain, it was so calm and peaceful in the basin that I decided to linger a little longer. At about 5:55 p.m., I began to hear the sound of two great-horned owls dueting back and forth one with another. It was a sweet way to end my day. For the day, I observed 45 different species, and I counted 1,122 birds. I was very pleased with my results!

I wish you a Merry Christmas, and until next week, Happy Birding!